War on Women Extends Beyond the Grave

In the latest outrage against the fairer sex a group in France is proposing to desecrate the graves of a number of famous French women.  Not only that, they are conducting a poll to see which one most deserves it!

Apparently France buries many of its most famous dignitaries in a building called the Paris Pantheon.  These are statesmen, scientists and artists who changed the world, or at least the tiny portion of it called France.  The Paris Pantheon is based on the Roman Pantheon with which it shares a facade, but in typical, garish, French fashion they have cobbled a dome on top of it so as to… well, no one really knows why…  I guess for the same reason they stuck a pyramid in front of the Louvre and then decided that urinals are art and should be on display within the museum itself rather than being relegated solely to the restrooms. 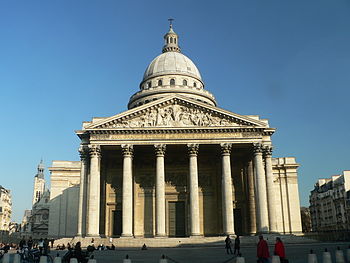 Paris Panthon shown above before addition of proposed porta-potty.

At any rate, it seems that in the past almost all important Frenchmen had the temerity to be, well men (as opposed to now when even garden variety men of no substance know better than to act in such a way).  One can argue as to why that is, but certainly the attitudes of society and governmental impediments towards women in past times would be major factors.  Nevertheless, regardless of the reason, the overwhelming majority of statesmen, artists, authors etc… who are remembered in history, and who had the greatest effect on history in France were men.  This is reflected by the fact that only two woman are buried in the Pantheon; and one of those only because of her refusal to be buried separately from her husband.  Like Hillary Clinton, she married her way in.

Of course this acknowledgement of past inequality cannot be allowed to stand unchallenged!  But how could one go about rectifying something that happened in the past?  The French are a clever people who have invented many things such as pasteurization, Goths, body odor and the white-cross-on-argent-field, battle flag.   But to my knowledge they have not yet invented a time machine.  You will know when that day comes because Bridgette Bardot’s breasts will surely be used for beta testing.  If you thought a potential for a singularity powerful enough to eventually eat the entire planet (as was feared might happen when they fired up the Large Hadron Collider) got a lot of news coverage then you know it would not be possible to miss an event of logarithmically greater importance and potential risk as reinflating France’s past twin glories.  If nothing else you would hear about it on The Daily Show.

At this point most people would acknowledge reality and consider it enough that going forward women will have a better chance of receiving the honor of being interred in the Pantheon.  But such people underestimate the fertility of the post-modern mind.  Minds so fertile they are filled with… well, for lack of a better analogy, or a better imagination… fertilizer.

After thinking very hard (for at least a couple of seconds apparently) feminists and malcontents going under the banner of a group daringly called Osez le féminisme (Dare to be Feminist) have decided that half-measures will not do and some poor woman must have her corpse dug up against her will so she can be moved into the coed dorm/mausoleum at the Pantheon.   This magnificent gesture will then prove… well…  exactly the opposite of what the group intends… that women can be irrational and infantile.  Editor’s Note: Men can as well but they don’t tend to organize whole movements around it… unless you count the Democratic Party.

Apparently they are now conducting a poll to see who the lucky broad will be who will have her eternal rest interrupted so that her dust and bones can be moved away from her friends and loved ones and closer to the dust and bones of some man she never met.  A man whom she probably wouldn’t even have gone on a date with had she had been given the choice will now be her companion for eternity rather than the husband she chose for herself.  I guess in the minds of these feminists a woman’s accomplishments in life cannot be validated unless she is buried close to a man of equal or greater stature;  Hypergamy for zombies through an arranged marriage if you will.

A picture of the most powerful man currently in France so you can see who your daughter is competing to be buried with.

On the bright side, given that we are talking about the French here, I am sure someone will be along shortly with the bright idea of adding a urinal to the crypt — just in case.  Then in a generation or two we can be treated to the sight of protests demanding that a proper toilet and bidet also be added in the name of equality.