University of WI Issues List of Microagressions to Avoid

Some lunatic at the University of WI (and I know that doesn’t narrow it down much) has issued a list of what to say and what not to say to minorities because making such a list isn’t racist at all.  It is like the left-wing version of “you might be a redneck if.”  Apparently you are a racist if you do or say any of the things on the list.

All I can conclude is that anyone who can read this thing with a straight face has no business even being in college.

I took the liberty of adding a column to it so as to explain what the kids are really thinking when they read this and the true message that is being sent. 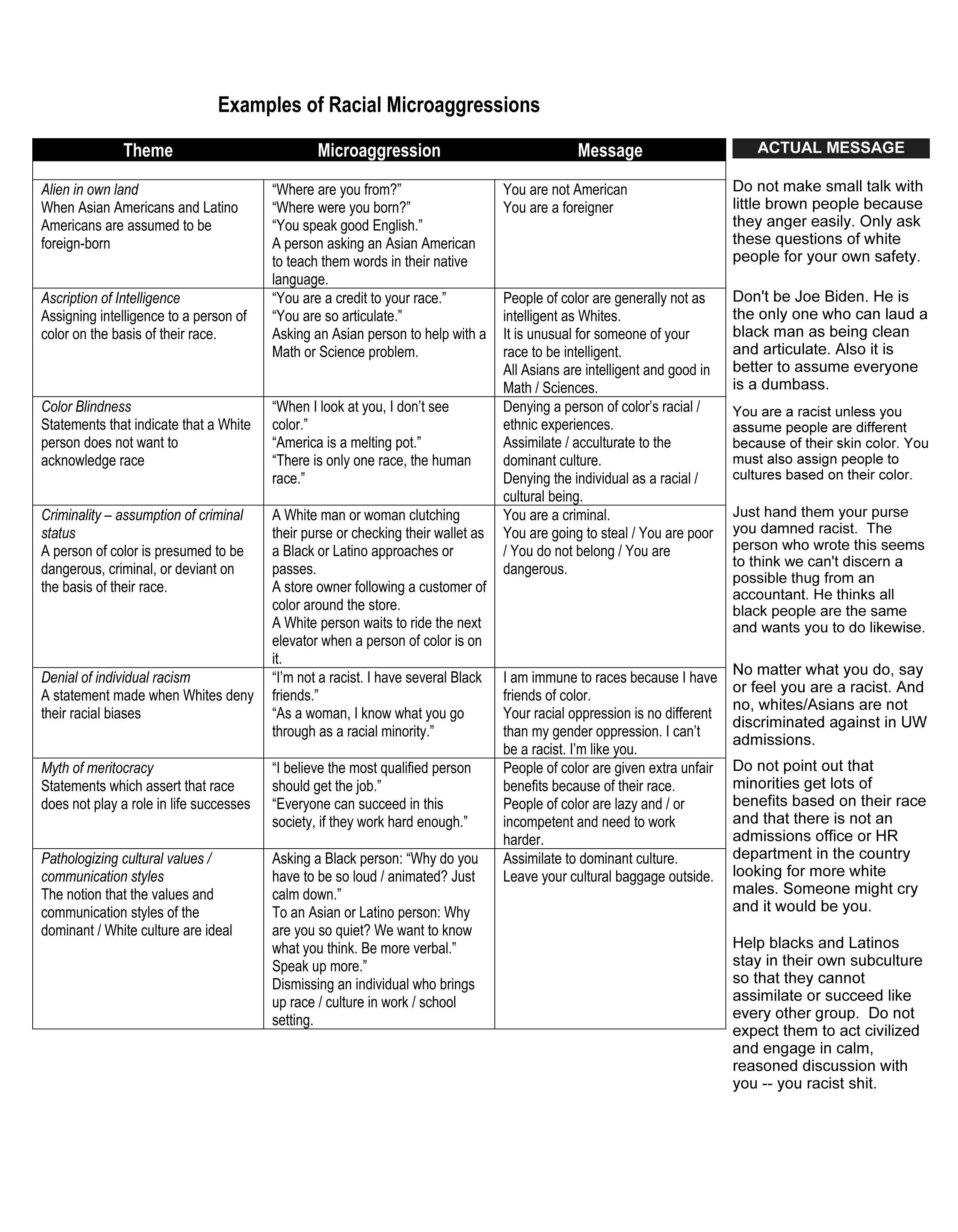 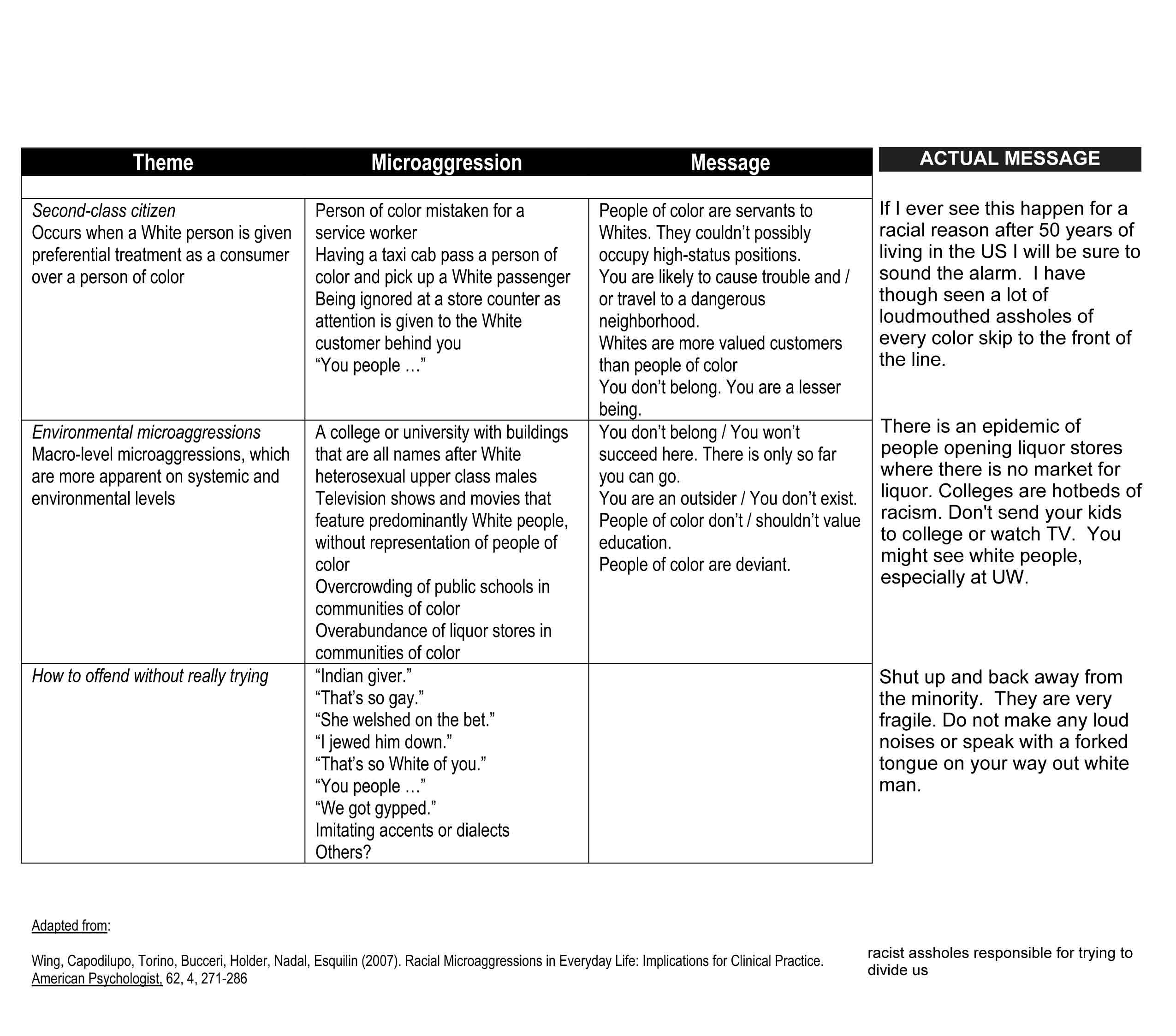 Somewhere along the way to crazyland “where are you from” went from being an icebreaker to get to know someone to being an aggressive act.  It seems to me it would be just as insulting to assume everyone is from the same place.  Isn’t that jingoistic or something?   Are we doomed to date and marry people without ever being able to ask where they are from?  How would that even work?  And if it is OK to ask sometimes then what are the parameters as to when and where?  Surely we can’t be left to decide such things for ourselves?  What would be the point of making handouts if that were the case?

The absurdity of this is that any white person who manages to get into college has already been discriminated against since they are required to have higher grades and test scores.  Then they get the privilege of being lectured about how privileged they are — that being the privilege of having to achieve at a higher level to receive the same reward.  It is just another way to emphasize the fact that they are a second class citizens.  And don’t you DARE argue that admissions should be color blind.  It is racist not to take into account race because…  well, just because.

It is madness on a stick and the people who come up with this stuff are sick and twisted individuals.  Most of us are decent enough to understand that race doesn’t matter.  But there are a few holdouts, mainly in our colleges, who bitterly cling to their racism and double standards and they desperately want to convince everyone that race does indeed matter. In fact, to them, it is the only thing that matters and it is the prism through which everything else must be viewed.

They seek to divide us and create racial animus because they profit from the friction.  The only way it ends is if kids going to college don’t just accept handouts like this, or sit silently when they are being lectured or libeled as to what despicable people they are.  Yeah, no one likes  confrontation.  It is uncomfortable.  And those you have to confront hold a lot of power over you.  But not as much as you think.  And here is the dirty little secret they don’t want you to know.  Deep down they know they are getting away with something they shouldn’t be allowed to get away with.  They are astounded that you don’t speak up and they will push you as far as you allow them to push you.  The fact that you will accept these sorts of absurdities in silence only emboldens them and emphasizes their power.

Never fear to speak the truth as you see it.  Never fear to mock these sorts of people.  They deserve it.  Marginalize them.  Shame them.  Laugh at them.  Fight back.  And never doubt for a second that you are on the right side of the issue.  These are the same people who gave us Jim Crow.  It just comes in a different flavor now.  Make them eat it.